With little training (no football during the week and DIY takes up some of my weekends) I had signed up to run the Bearbrook 10K and without really noticing; the weekend rushed up to me. havong not done much training meant that I was a little bit apprehensive. However, it was a beautiful day - cool and bright. I had a banana, a decent night's sleep and felt quite hydrated. I assume that a single banana probably wasn't enough.

Anyway, my wife was there to cheer me on and I assembled at the start (alongside the 45-50 minute crowd) and off we went. The pace was faster than I expected but I wanted to get a decent pace and then throttle it down, at least that is what I told myself!

By the second kilometre, the pace (around the 4.5 minute / kilometre) was beginning to tell and I started to slow down to something that I was happier with; I had another 8 kilometres of this so I had to finish in good order.

I reckon that I should think 'run faster' to actually get faster but that's between races! The rest of the race was a sedate affair. I took on water around the 7.5 km mark and continued through to the end. The last 1 km was a fast run, with me chasing two runners who I managed to catch up and beat to the finish line. 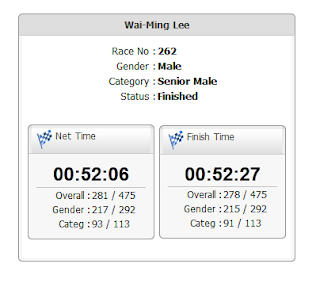