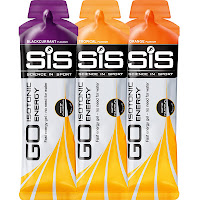 I am going to trial some of these energy gels and get used to the taste/texture/consuming-while-running as part of my prep work for the marathon. My past experience of 10K and half-marathons is that the water stops along the way (as well as an energy drink to begin with) is sufficient; however a bit of reading and research has thrown up some interesting bits of information. I am especially interested in 'hitting the wall', when the body has depleted it's store of useable glycogen and starts burning up fat instead. I actually don't know where my own level is but it's not before the half-marathon mark.

I suppose knowing this would be one more thing a seasoned marathon runner would know and they can then take mitigating steps. New to me, but second nature to seasoned runners.

Anway, I normally drink lucozade but been recommended to give the Science in Sport gels a crack and runner's world has some interesting reviews on these. Going to pack a couple for this weekend's run.

Today, I went out on the usual route - wetter than usual and parts of the canal tow-path are flooded so I hopped and skipped my way through some of the wetter parts. Oddly, I finished the route faster than I did this week: despite feeling it was slower.

Right, off to quafe some more lucozade!

Please sponsor me for the London 2013 Marathon, click here.
Posted by Unknown at Monday, February 04, 2013